The path meanders amongst some woodland, and we can occasionally glimpse remnants of the canal surviving as a reed-bedecked ditch just to our left. The course of the Wall lies beneath the road beyond those soggy bits. A prostrate oak forest was found some way beneath the curtain wall when the canal was being dug in 1823, a remnant of inundation during a Holocene sea-level change. Soon, we pass through a kissing gate and reach the point where we part company with the course of the Wall ditch and the route of the Port Carlisle Railway.

The Trail on the old railway line

We weave around the back of some houses and discover the sea-lock of the former Carlisle Canal. We cross this and carry on down the lane, admiring the red sandstone quay of Port Carlisle (or Fisher’s Cross as it used to be called). The Wall now makes an abrupt 68° turn almost due west, near the location of Turret 78B. Off to our left, beyond the playground, the bowling green car park sits on the site of the old railway station, a line of stone flags betraying the edge of the platform.

The site of Turret 78b

Exiting the lane onto the coast road, we head off to the west (or right, as we call it in the trade), remembering to stay on the same side as the oncoming traffic and exercising ridiculous amounts of care as we go. Over to our left, just past the terrace of houses, note how the land slopes down to the road. The Wall is running upon that slightly higher ground. As ever, an attacker would be disadvantaged, for – having crossed the estuary – they would have to run uphill to the Wall. The road bends gently round to the right and we arrive unceremoniously at the site of  our penultimate milecastle, number 79. It is located off in the distance, the line of the Wall now being marked by a hedgerow in the shimmering heat-haze we almost certainly won’t be contending with.

In many ways, we are about to embark upon the least satisfactory of all the Wall miles, with no Wall and stuck on an unsympathetic, if vaguely picturesque, road. This is just one of the disadvantages of walking east to west, as we shall find in that, our final Wall mile (although we are probably going to have to admit that it’s a bit late now to turn back).

Milecastle 79, somewhere up there, in the distance, honest!

Milecastle 79 was excavated in 1949 (by Ukrainians from the Lockerbie POW camp) and in 1999, when both the Turf Wall milecastle and its stone successor were examined. Unusually, this was a square milecastle, since (your will recall) most are either ‘short axis’ (broader east–west) or ‘long axis’ longer north–south.

Raven Bank at the
T-junction. A glimpse of hills,
Catch Solway’s salt scent.

Kirkland in a field.
Holiday campers ignore
The mighty frontier.

Bowness, last of all.
Stacked beneath a mighty fort,
Under the village.

Milecastle haiku
Are done, but the Wall lives on;
Speaking the landscape. 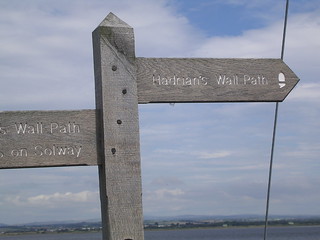 Now we should proceed towards Port Carlisle, still on the road (but the verge can be quite useful for avoiding the more eager motorist). As we pass the second solitary house, and before we reach the terrace of houses aligned north to south (NY 238 623), if we look to our right we may note how the land slopes up from the road to the course of the Wall. It has lost its hedge line by this point, but its course takes it along that slightly higher ground. We shall return to the Wall’s tactical use of the landscape later, but for now just note that an attacker, having crossed the estuary would have to run (slightly) uphill to the Wall.

Altar built into the front of Hesket House

Once we are past that terrace of houses on the right, the road bends to the right and we need to cross over and take the path indicated by the wooden National Trail signpost (next to an old gas street lamp). However, it is worth making a slight detour some 30m along the main road into Port Carlisle and noting another altar built into the front of Hesket House guest house (the first house on the left, easy to spot by its green-painted quoins and window surrounds), just above the door lintel. This is still legible and the words ‘MATRIBVS SVIS‘ can be made out, although, for the next word ‘MILITES‘, just the tops of the letters survive (the whole thing reads ‘to their own mother goddesses, the solders…’). Now we should head back to the Trail.

As we walk along the path, the Wall has been heading obliquely on a due east–west course for a rendezvous at the point where we turn a corner and see the red sandstone quay of Port Carlisle (or Fisher’s Cross as it used to be called). The Wall now makes an abrupt 68 degree turn towards the south-east at the location of Turret 78b (NY 240 622). We cross the bridge over the sea-lock of the former Carlisle Canal (opened in 1823, closed in 1853: badly timed to coincide with the arrival of the railways) and follow the Trail signs that take us to the left of the bungalow. The path meanders amongst some scrub seemingly undecidedly for a while, before we pass through a gate and two things happen simultaneously (NY 242 619): first we join the course of the Wall ditch and, second, the route of the Port Carlisle Railway that all-too-ironically replaced the ill-fated canal in 1854, for the two coincide for a short distance. Some remnants of the canal survive as a reed-bedecked ditch just to our right and the course of the Wall lies beneath the road beyond it. A prostrate forest – possibly the result of a post-glacial inundation of the Solway plain – was found some way beneath the curtain wall when the canal was being dug in 1823. Near the position of Turret 78a, the Trail departs from the course of the ditch and we must continue to the point where the path crosses the road, just beyond the location of Milecastle 78 (NY 246 613). 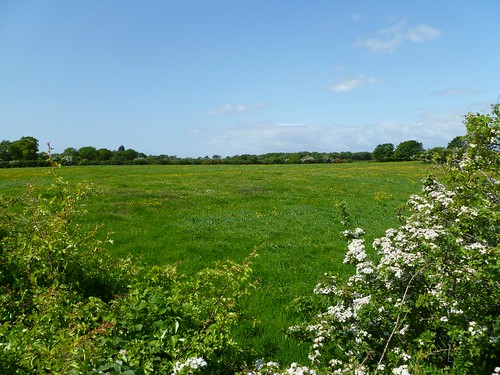 Milecastle 78 (Kirkland) was first noted by Horsley in 1725 and excavated in 1934 and 2000, when it was found to be a long-axis variant. There is nothing to see, certainly not from our vantage point, but we have the satisfaction of knowing it is there, which is more than can be said for some milecastles.