Heading eastwards from the dramatic and slightly forlorn pinnacle of rock, we find that the ditch gets ever shallower, evidently having been little more than marked out, rather than fully excavated. The Trail currently passes to the south of the wall next to the trig point, then heads south until a break in the newly emerged consolidated curtain wall, where we cross the barrier again onto the berm and make our way down to the end of the field. Note that the Military Road is not on the line of the wall, here, but rather sits on the north mound of the Vallum (where it stays for nearly four Wall miles). 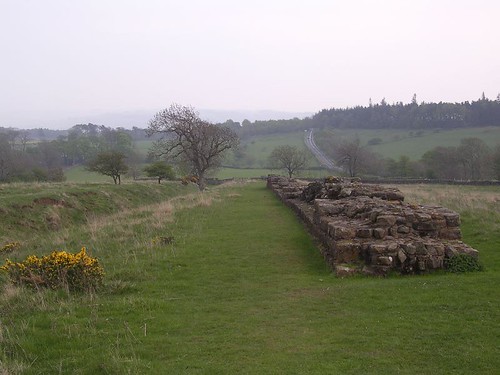 Crossing a small lane and entering the next gently sloping field, we find a splendid stretch of curtain wall and ditch at Black Carts. Two-thirds of the way down are the remains of Turret 29a. 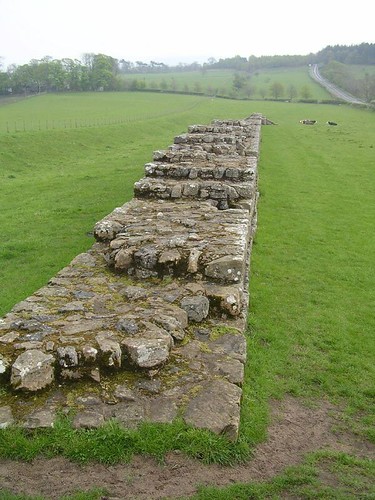 Turret 29a (Black Carts), famously depicted in one of the woodcuts in Collingwood Bruce’s Handbook, survives to eleven courses within its recess, and has the familiar wing walls of a broad-gauge turret wed to the narrow-gauge curtain wall. It was first excavated by John Clayton in 1873 and subsequently re-examined in 1971. The threshold block in the doorway is of particular interest, since it retains the settings for the monolithic uprights that formed the door jambs, and the socket on the eastern side shows which way the door opened (remembering defensive doorways and gateways always opened inwards).

If you are feeling adventurous, you can nip round to the north side of the wall and hunt for a building inscription. One lies 55m from the west end (or 90m from the east) of this stretch of wall and records construction work under a centurion from the first cohort of a legion by the name of Nas(…) Ba(ssus). It has been suggested that legio XX was responsible for the initial construction of this section of wall. Bassus crops up elsewhere and an almost identical stone can be seen in Chesters museum which, although unprovenanced, may well be the pair to this stone. It has long been thought that building inscriptions were only placed on the south face of the curtain wall and that those on the north side were a result of rebuilding work. The fact that this stone is in the second course may give pause to question this argument for their placing, but it may equally hint at a very thorough rebuilding of this bit of the curtain wall (and such major reconstruction work is known elsewhere). 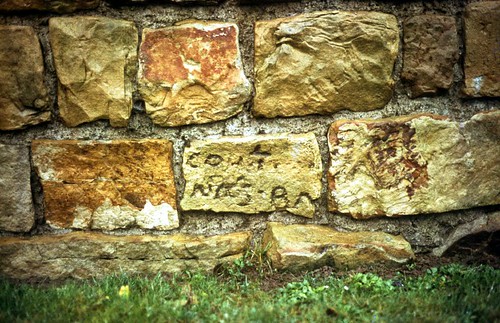 Leaving Black Carts behind us, we cross a lane and then head up a gently sloping field towards a plantation near the top, the ditch still visible to our left, but the curtain wall now hidden. Near the top of the field is the site of Milecastle 29. 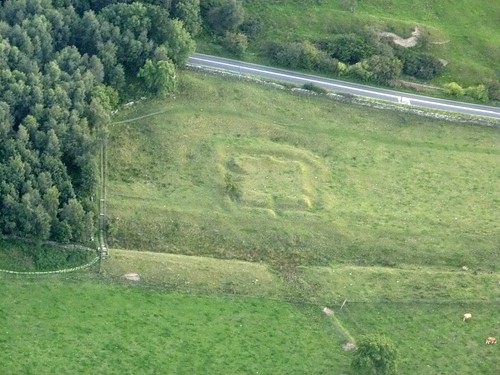 Milecastle 29 from the air

Milecastle 29 (Tower Tye), like Milecastle 38 (remember those bankers?), exists now solely as an earthwork, but is nevertheless an extremely interesting example. Excavated by John Clayton, the robber trenches for its walls are still sharply defined. However, there is an additional detail that the keen-of-eye may be able to make out and that is the fact that the milecastle is one of the few known to have had a ditch around it. It shows up now as a shallow depression around the west, south, and east sides.