Departing Carrawburgh, we head eastwards up the field, past some recent quarrying next to the Military Road, and before long the Vallum re-emerges, now with the Military Way perched on its north mound. We now have to negotiate another crossing of the Military Road (so, once again, take care as there are maniacs in cars along here), backtracking slightly to get into the far field and resume the Trail to the north of the ditch. Before heading on, look back towards Carrawburgh and you will see a view that has changed little from when J. P. Gibson took a photograph of it before the First World War, although his model was then able to sit down in the road (which did not have a tarmac surface and was much lower than the current ‘blacktop’).

The Military Road at Carrawburgh before tarmac and cars

We plod on to the north of the ditch, now being a good time to admire those roadside drystone walls (they are easier to see from either side than from the road, due to the changes in level since the road was built). The larger blocks, curiously familiar from our perambulations next to the curtain wall, are interrupted by regular lines of throughstones. This pattern of construction becomes obvious when poor quality repairs are attempted in places, although this stretch is in good order.

The construction of the Military Road began in 1749 with a survey from west to east, undertaken by military engineers Dugal Campbell and Hugh Debbeig (the latter serving later at Wolfe’s side at Quebec), the actual work of building the road and walls being contracted out to civilian companies (unlike the other military roads in the Highlands, which the Hannoverian army built). 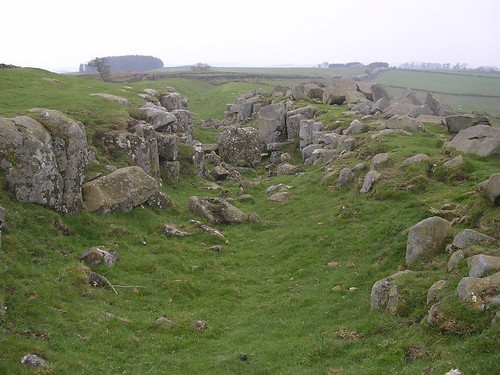 Finally, we cross a stile and reach one of the great enigmas of Hadrian’s Wall: Limestone Corner. Why an enigma? Well, there’s no limestone there for starters; it starts further to the east – no matter. More perplexingly, this is the point at which the Roman army got fed up digging their ditch and gave up. It is perplexing as the vallum diggers had no such problems and ploughed through the whin stone along here regardless, so it seems the ditch-diggers may have had a bad Friday afternoon. The most exciting thing about Limestone Corner is that the course of the ditch (and curtain wall) moves offline in order to stay at the top of the scarp, thereby (once again) enhancing the defensive effect of the ditch (although not quite as much as if they had actually finished it, of course). To the south of us, large chunks of whin have been discarded down the slope, the largest of which (subsequently split into two) has been estimated as weighing around twelve tonnes (naturally, there is no record of anybody having actually weighed it; this is a guesstimate). Such pieces probably had to be removed with sheer legs, a technology with which the Roman army were not unfamiliar. 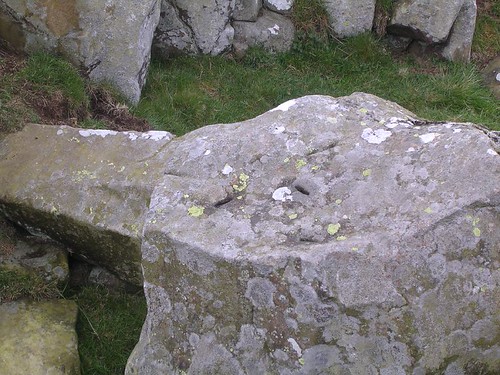 If we move a little further on from the point where the Trail crosses the ditch, we can stop by a large rock protruding from the base of the ditch. Wedge holes can still be seen in the top of it where the attempts to split it were given up; it must have been a bad day.

Milecastle 30 (Limestone Corner) survives as an earthwork to the south of the field wall (which is set back slightly from the line of the curtain wall), excavation showing that the narrow wall butted against broad wing walls.