Once on the east side of Boomby Gill, we are now nearing Carlisle, but first we have the inestimable joy of our first sight of the Vallum. Just before we reach the pylons, its earthworks are visible off to our right, subdued but there nonetheless. The Vallum originally consisted of a broad flat-bottomed ditch 6m (20 Roman feet) wide and 3m (10 Roman feet) deep, flanked by mounds to its north and south formed from the upcast. Both mounds were separated from the ditch by a 9m (30 Roman feet) flat strip or berm. The name Vallum is modern, reflecting a name given to it by Bede in his Ecclesiastical History (1.5, using the Latin word for rampart). Its function is unknown but it is assumed to have delineated the southern boundary of the frontier zone, limiting access to the gates through the Wall. 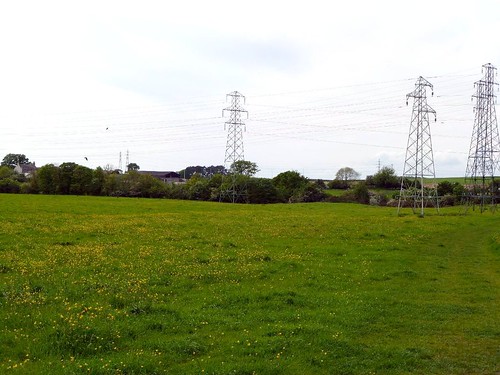 The Vallum with pylons

Now might be an opportune moment to raise the subject of what the Romans called Hadrian’s Wall, if only in order to confront the inevitable confusion that is going to arise over that term Vallum. In the biographies of Hadrian and Severus in the Historia Augusta, the curtain wall is called a murus and that is what Bede calls it (distinguishing it from the earthwork he – and modern scholars – terms the Vallum). However, elsewhere in the biography of Severus, it seems to be mentioned again in connection with a curious incident involving North African troops with the phrase ‘apud vallum’ or ‘near the Wall’. The Notitia Dignitatum supplies a list of units and their commanding officers ‘per lineam valli’, or ‘along the line of the Wall’. An inscription from Kirksteads, south-east of Burgh-by-Sands, which uses the phrase ‘trans vallum’ has already been mentioned. The Latin word vallum can mean wall or rampart (Latin can be annoyingly vague at times) but it may be significant that what appears to be a souvenir copper-alloy pan, the so-called Staffordshire Moorlands Pan, includes before a list of Wall forts the phrase ‘rigore Vali Aeli Draconis’. This could mean ‘along the Wall, (belonging to) Aelius Draco’ or ‘along the Aelian Wall, (belonging to) Draco’. The second interpretation is rather interesting, since Hadrian’s name was Publius Aelius Hadrianus, in which case the Roman equivalent of our Hadrian’s Wall would have been Val(l)um Aelium (or the Aelian Wall). This is strangely reminiscent of the Roman name for Newcastle and its bridge, Pons Aelii, the Aelian Bridge. And what did the Romans call the thing we call the Vallum? We have no idea.

Milecastle 67 (Stainton) is another unlocated example and, yet again, one that spacing suggests should be perched on one side or another of a small tributary to the Eden. 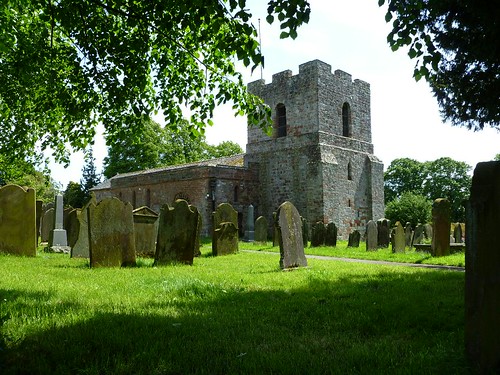 As with the earlier fort sites, Roman Burgh is all around us, quite literally. Many of the buildings and much of the church are built out of the red sandstone blocks originally used for the curtain wall and fort. Otherwise, as at Bowness and Drumburgh, there is nothing to see of it now. A visit to the church will, however, reveal a stone in the chancel that is claimed (somewhat implausibly) to be a Roman or ‘Celtic’ moustachioed head. ‘Celtic’ heads tend to draw the strangest people out of the woodwork and this one did not make it into the definitive account of Roman sculpture, the Corpus Signorum Imperii Romani; make of that what you will.

There were three distinct sites at Burgh. Burgh I was a late-1st-century AD turf-and-timber fort, possibly belonging to the Stanegate series of sites. Burgh II was the Hadrianic Wall fort and covered an area of 2ha (4.9 acres). It was situated on top of Turret 71b, near Sandwath ford, one of the lowest crossing points of the Solway Firth. In the 3rd century, the garrison was a numerus of Mauri from North Africa – recalling an episode in the Historia Augusta  (Life of Severus 22) when Septimius Severus had an unpleasant encounter with a Moor near the Wall. Other units recorded include ala I Tungrorum, cohors I Germanorum Nerviana, part-mounted and milliary, and a cuneus Frisiorum (also found at Housesteads). 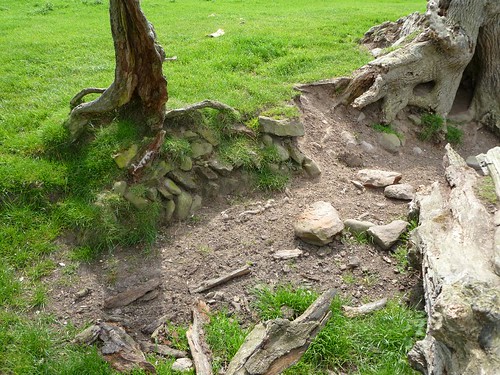 The course of the curtain wall leaves Burgh more or less on the line of the road but makes a sharp turn to the north-east about 150m east of the eastern end of the churchyard. The Trail, meanwhile, takes us off the road and down a field next to it (the wall crosses the path about half way down the field, although there is nothing to show it), before we rejoin the road and then turn north up a track, cross a small bridge, and rejoin the line of the curtain wall (at NY 333 591), heading north-east. A shallow, marshy depression resembles the ditch but is in fact later disturbance, although the hedgeline now follows the line of the barrier, which is marked by a series of gnarled old hawthorn trees. Amongst the roots you can occasionally glimpse pieces of stone from the fabric of the wall. The trail then takes us into a lane that approximates to the course of the Wall ditch and this is the site of Milecastle 71.

Milecastle 71 (Wormanby) has been examined by excavation in 1960 and again in 2000, although there is nothing to see, once more.

As with Wall Mile 75, nothing is known about Wall Mile 74. This might therefore be a good time to consider the Turf Wall.

Initially, Hadrian’s Wall consisted of a stone curtain wall between Newcastle and the River Irthing (Wall Miles 4 to 48) and then a turf rampart from the Irthing to Bowness (49 to 79). The rampart, nowadays called the Turf Wall, was built on a base about 6m (20 Roman feet) wide with no foundation trench; in some places just laid turves, in others cobbles, were used as a base, but it seems to have depended what materials were available. The rear face sloped at an angle of about 67° and the front was vertical near the base and then probably sloped above.

The Turf Wall was equipped with turf and timber milecastles but stone turrets. These turrets, built free-standing and with the turf rampart then butted against them, were retained when the stone curtain wall was built. The ditch that was dug for the Turf Wall was retained for the Stone Wall, although the berm increased in width from around 1.9–2.4m (6–8 Roman feet) to 6m (20 Roman feet).

It is assumed there was some sort of wooden superstructure, such as a walkway and parapet, but almost no evidence has survived to support this. The one clue that there might have been a walkway comes from the fact that when the Turf Wall was replaced by a stone curtain, that stone wall was set back slightly from the front of the turrets. Some scholars have suggested this shows it was lined up with existing doorways on the turrets giving access to a walkway.

When forts were added, those in Wall Miles 49 to 79 started as turf-and-timber constructions (this has been shown by excavation at Bowness, Drumburgh, and Castlesteads, and presumed for Burgh, Stanwix, and Birdoswald).

Reconstructions of the Turf Wall can be seen at Vindolanda and in the Borders Gallery of Tullie House Museum in Carlisle.

Naturally, Milecastle 74 (Burgh Marsh) has not been found.

Wall Miles 75 to 73 are problematical.

The Wall probably crossed Burgh Marsh, more or less directly between Milecastles 76 and 73, but antiquarians and archaeologists alike have puzzled over this stretch. Nothing of the curtain wall or its associated components has ever been found and some writers have suggested it never existed in this area (an approach adopted by the English Heritage Archaeological Map of the Wall, with its unapologetic gap) but this makes no sense strategically or tactically and begs the question of why the Cumbrian Coast defences should have been constructed if the Roman military were happy to leave a big inviting hole in their frontier. After all, anybody who could cross an estuary could cross a marsh (as Edward I was intending to do before he met his timely – or untimely, according to your point of view – death). Moreover, the Romans were quite capable of building across marshy areas, as numerous ‘floating’ roads demonstrate (a fine example exists in Britain crossing the floodplain of the River Idle near Bawtry in Nottinghamshire). It may have been destroyed by the Solway, but it is equally possible it will one day be found. 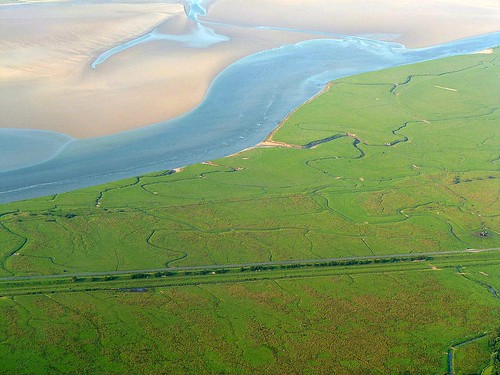 We may now continue a pleasant walk along the side of the road towards Burgh-by-Sands (another ‘bruff’). Alternatively, you may choose to enjoy a slightly more elevated vantage point by walking on top of the levee (thereby avoiding the traffic on the road which ranges from the sedate to the lunatic), although rumour has it that that can disturb the local bird population, but it is up to you. Incidentally, the combination of the levee and the old railway course is one of the most striking landscape features from the air and at least one documentary film crew has mistaken it for the course of the Wall or Vallum.

As we leave Drumburgh, the old railway is to our right (the site of the station hardstanding can still be made out beyond the levee) and off in the marshes to the left is a giant concrete arrow, a hint for confused pilots from the days when the Solway Firth was a military range.

It need hardly be added that Milecastle 75 (Easton) has not been found.