As we depart Milecastle 33, we are still on the approximate line of the curtain wall, but shortly we cross over the ditch and find ourselves firmly in Barbaricum for a while. This occurs at the point where the Military Road shuffles in and adopts a position on top of the curtain wall which it will retain, for the most part, until we reach the outskirts of Newcastle. Now we are walking along the line of the upcast mound and there is a little to see, beyond the ditch, hard up against the north wall of the Military Road. 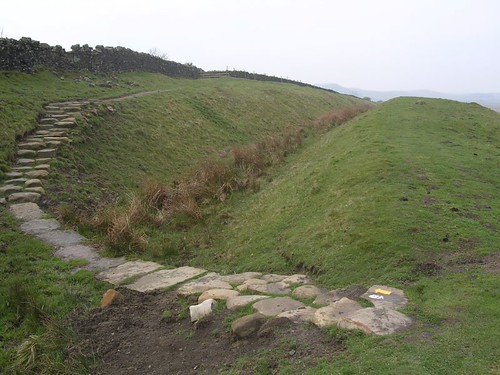 The Trail crosses the ditch

These walls are interesting (as indeed is the Military Road, about which we shall say more in due course). Before the road was built, Hadrian’s Wall itself was the major land division, so destroying it and laying a road required that walls be built on either side of it, to placate the landowners. Therefore, the road-laying gangs also had to undertake wall construction, and there are still some fine examples of the drystone-wallers’ art to be seen as we progress towards our destination. 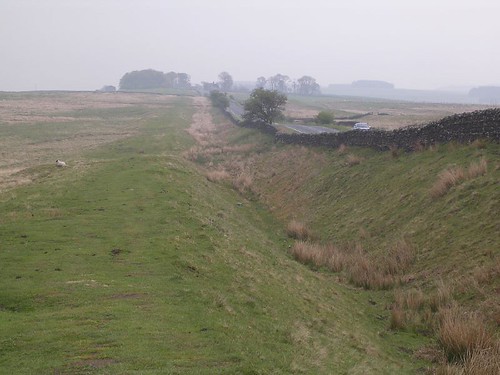 After an interminable distance (or so it seems) we cross a drystone wall by means of a ladder stile and then it is only some 220m to the location of Milecastle 32 (Carraw). Don’t bother looking for it, as it is on the other side of the road (remember: the Military Road sits on top of the curtain wall, now, so the milecastle is south of that), but it survives as a low earthwork, was of the long-axis type, and was excavated in 1971. 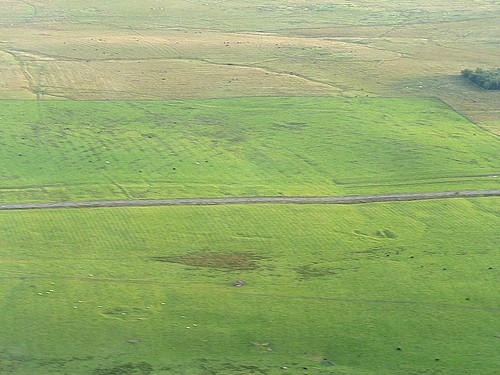 The site of Milecastle 32 from the air